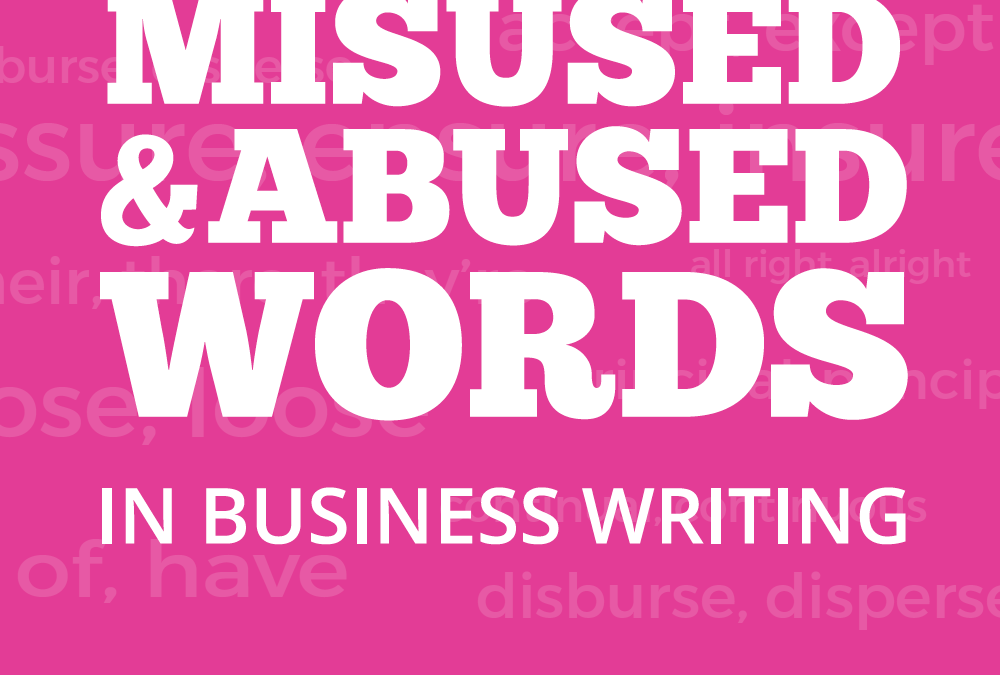 “Twain was dead on. (No surprise there!) At the very least, using the wrong word in a report, proposal, paper or memo can be embarrassing. At its worst, misusing words can damage your credibility and even prove costly at times.

One big problem with language today is the way we speak and the way we write are often two different beasts.

What follows is a list of words and phrases we commonly misuse. Hopefully, most of them won’t be eye-openers, but a few may surprise you:”

accept – (verb) To agree with, take in, receive. Example: We accept your decision.

except – (preposition) Apart from. Example: All committee members are present except for Ms. Brown.

chronic – (adjective) Constant, habitual, long- lasting. Example: She is unable to work because of a chronic illness.

averse – (adjective) Antipathy, repugnance, having the feeling of being opposed. Example: She is not averse to increasing her workload.

affect – (verb) To influence something. Example: How will that affect the bottom line?

effect – (noun) The result of. (verb) to cause something to be. Example: Her speech had the effect of motivating the listeners.allusion,

“allusion – (noun) A casual reference of mention of something. Example: Was that an allusion to Hemingway?

illusion – (noun) Something that gives a false picture of reality. Example: He believes democracy is an illusion.

alright – Incorrect spelling, but often shows up in informal writing.

averse – (adjective) Antipathy, repugnance, having the feeling of being opposed. Example: She is not averse to increasing
her workload.

apprise – (verb) Give notice to. Example: Please apprise me of the situation.

appraise – (verb) Determine the worth of something. Example: The ring was appraised before we purchased it.”

assure – (verb) To state with confidence, pledge or promise. Example: I assure you the check is in the mail.

insure – (verb) To purchase insurance. Example: Insure the package before you mail it.

beside – (preposition) At the side of, next to, near. Example: Take a seat beside me.

besides – (adverb) Furthermore, in addition to. Example: Besides, several of us will be out of town next week.

compliment – (verb) To give praise. Example: I complimented Steve on his speech.

complement – (verb) To complete something or match it well. Example: Her skills complement the needs of our department.continual, continuous

disburse – (verb) To pay, distribute, scatter. Example: They disbursed name tags to everyone attending the meeting.

disperse – (verb) To drive off, spread widely, cause to vanish. Example: The throng of fans dispersed into the stands.

farther – (adverb) At or to a greater distance. Example: We are located farther down the highway.

further – (adverb) More or additional — but not related to distance. Example: We need to have further discussion on that.

fewer – (adjective) Of a small number, only used with countable items. Example: He made fewer mistakes than last time.

less – (adjective or adverb) To a smaller extent, amount or degree — used with quantities that cannot be individually counted. Example: If they made less noise, we could concentrate.

imply – (verb) To suggest. Example: What are you implying by that accusation?

infer – (verb) To deduce from evidence. Example: From the look on your face, I can infer you’re not happy with the decision.”

its – (pronoun) Possessive form of “it.” Example: The machine has lost its ability to scan documents.

it’s – Contraction of “it is.” Example: It’s not a question of right or wrong.

lose – (verb) Fail to win, misplace. Example: Did you lose your file?

loose – (adjective) Free from anything that restrains. Example: Since losing weight, his clothes seem loose.” “of, have”

of – (preposition) Frequently confused with “have” since “could’ve” is pronounced “could of.” But “of” cannot be used as a verb.

have – (verb) Proper verb form for “could have,” “should have” and “would have.”

regardless – (adjective or adverb) In spite of. Example: We are leaving, regardless of whether you’re ready.

irregardless – This is not a word. (Yes, you may find it in your dictionary, but you’re only embarrassing yourself if you use it.)

than – (preposition) In contrast to. Example: I’d rather speak face-to-face than communicate by e-mail.

then – (adverb) Next. Example: We met for dinner, then went to a movie.

their – (pronoun) Belonging to them. Example: Where is their car?

there – (adverb) In a place. Example: Let’s visit there.

they’re – Contraction of “they are.” Example: They’re not leaving without saying good-bye, are they?”

whose – (pronoun) Possessive case of “who” or “which.” Example: Whose keys are these?

who’s – Contraction of “who is.” Example: Who’s going to the game after work?

your – (pronoun) Belonging to you. Example: Your briefcase is over there.

you’re – Contraction of “you are.” Example: You’re not going to believe this.”

Yep that is 50 of the most misused and abused words in business writing.

This site uses Akismet to reduce spam. Learn how your comment data is processed.